Sobering up led to a future and a hope 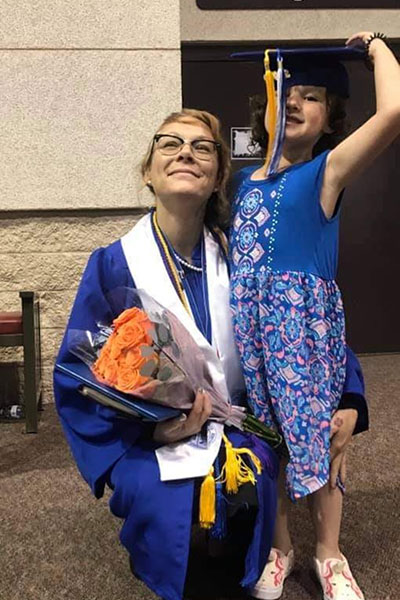 She dropped out of high school her sophomore year.

By 21, she gave birth to her first child and by 30 Holt was raising four girls without her ex-husband. “I was on my own just like my mother,” she said.

Holt earned her GED by her mid-30s but said she didn’t have the strength to fully pursue higher education. Twelve years later, she found herself battling alcohol abuse.

“I had lost purpose, was burnt out with my job, and had become a terrible alcoholic,” said Holt. “I was addicted.”

The addiction came to an end when Holt got sick of feeling sick and started thirsting for a better life for her family. With the help of medical professionals and support from her family, Holt took steps toward soberness at 42 years old.

“There I was sober and bored, and I thought why not take a class to keep my mind focused?” said Holt. “I chose Drake State because I wanted a diverse learning experience and easier access to instructors.”

Holt previously spent five years in the mapping design industry. In her spare time, she loved drawing homes and initially thought of taking an engineering class to dive into the subject more. Holt had no idea that visiting Drake State for the first time would lead her to meet her biggest ally on campus.

“I cannot begin to tell you how that man changed my life,” said Holt. “He was more than a teacher that day. He listened, he understood, he sympathized, and he has been one of the best cheerleaders for me since day one.”

That man was Engineering Graphics Department Chair Bob Grissim. Grissim was the first to hear of Debbie’s struggles outside of family, and in many respects, Holt said he and several other instructors helped her maintain sobriety.

“I would consider myself a survivor,” said Holt, “maybe a ‘success’ by definition. I did accomplish a purpose at Drake State, but I did not do it alone.”

Holt didn’t sign-up for one class. She enrolled full-time and earned her associate degree in Engineering Graphics. She didn’t stop there. Holt entered the geospatial industry and has been working at GIS Surveyors, Inc. (GSi) for the past three years.

“The company has been so supportive that they allowed me to work remotely while in school,” said Holt.

While working at GSi, Holt won the Community College Presidential Scholarship – a full ride opportunity – to The University of Alabama in Tuscaloosa. She majored in Geography with a focus on Earth Systems Sciences and minored in GIS.

By 47 years of age, Holt successfully completed her time at UA and continues to embrace a mantra worth repeating over and over again.