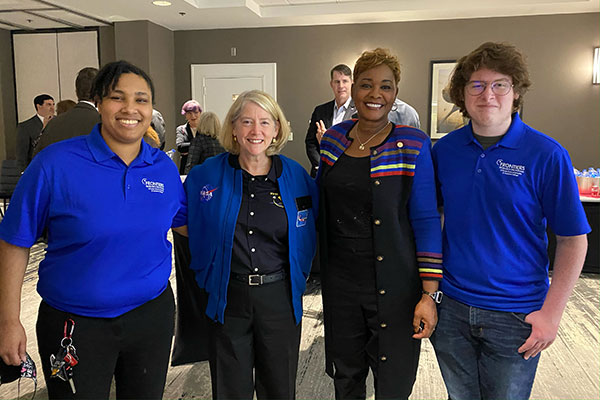 “It was unbelievable to be in a room with 3 astronauts!” said Sharde Tate. “It was such an amazing feeling to witness a female astronaut who contributed so much for NASA and really paved the way for the women after her in a field that is known for being dominated by men.”

NASA Deputy Administrator Pam Melroy inspired this Drake State Frontiers Research Intern to reach for the stars just as she did. Melroy was one of two women to command a space shuttle and served more than two decades in the Air Force and as a NASA astronaut.

On Nov. 30, Melroy stepped on stage with NASA Administrator Sen. Bill Nelson for a reception honoring their achievements in the aerospace industry. Tate and her Frontiers research partner Luke Thomas were present at this event.

“It was unbelievable to be in a room with 3 astronauts!” said Tate. “It was such an amazing feeling to witness a female astronaut who contributed so much for NASA and really paved the way for the women after her in a field that is known for being dominated by men.”

Tate said this was the first time she had met an astronaut face to face.

“I think the thing that inspired me the most out of her speech was everything she set out to do, she achieved. She mentioned that she wanted to be an astronaut after getting to watch the first moon landing.”

Right now, Tate gets to help NASA Marshall Space Flight Center design the interior components of a lunar habitat for the next man and first woman on the moon by 2024. The Frontiers research interns are figuring out how engineers can use a robotic arm to 3D print large-scale items such as bed frames, wall panels, brackets, and vents in space.

Melroy began her piloting career as early as 1984, at a time when, according to the Pilot Institute, a woman held one pilot certificate for every 4,224 men.

“She also got into the field at a time when women weren’t even being considered for the role, and I feel like she exceeded a lot of the expectations during that time,” said Tate.

Tate would like to manufacture her own robots one day to help disabled persons physically complete tasks without assistance. Tate said her interest in robots could improve lives and help NASA get closer to the goals within space exploration.

“The reception confirmed that as a woman, even though there aren’t many in this field, we can still make such a big impact,” said Tate. “Hopefully, I’ll be able to inspire women around me to get involved in this field and dominate just as the women before me have.”